This is Al Noteman's new Blog Site.
After the Novel 'Stolen Time' was published as an eBook on Amazon Kindle, Al and his wife Sonia returned to South Africa for a holiday for the first time since sailing away from Cape Town in 1993 on their home built yacht Jacana. While there seeing family and friends Al met up with his long-time sailing buddy Roy McBride who offered Al the chance to do a spot of sailing on a Dix Design 43-footer built on the west system by CKDBoats. Roy is the founder and owner of CKD Boats, a company specialising in building and supplying Dix Designed kit boats and who have exported now to more than 33 countries. It was Roy who gave Al his first taste of Ocean Sailing when in 1985 he asked Al to fly over to Rio to help him deliver an Endurance 37 from Rio back to Cape Town after the boat had taken part in the Cape to Rio International Yacht race. Roy and Al made the non-stop voyage across the South Atlantic Ocean in just 32-days on what was a heavy cruising boat.

The novel was first published with the first cover shown below and was downloaded by over 400 people however, Al thought the cover needed to convey more detail about the actual story so he decided to add a few words to it. He therefore re-named it, (click on the title to see the book on Amazon where you may read to chapter 8 for free!

.'From Blood Diamonds to Immortality
A Chilling Tale of Stolen Time.'


Please note that if you are using Internet Explorer as your Browser then you may not be able to see the whole blog right to the end? The end shows a notice for an auction for the sale of Slaves on St. Helena Island, so if you don't see that then I suggest you switch to Google Chrome, Firefox or Safari as your Browser, there is something wrong with Internet Explorer that they can't or won't fix it! If anyone out there knows how to fix the problem please let me know.


One of the reasons for the change of name was that there were several other novels with the words 'Stolen Time' in their titles so to avoid confusion the extra descriptive words were added.


This is the original cover. 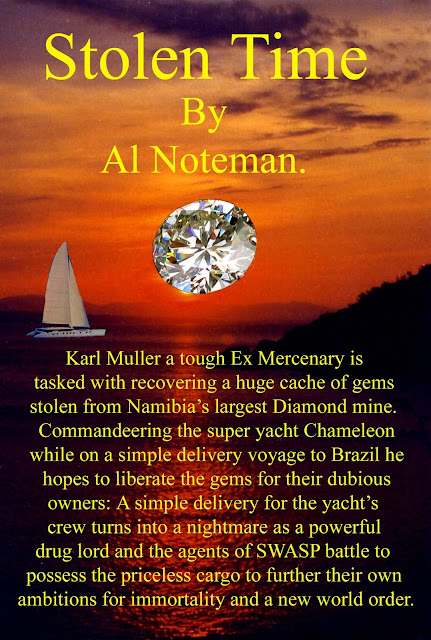 A copy of the new cover can be seen below.
Sunset photo's by Dee Hickling. Composition
by A. Noteman & Photoshop.


This is a work of fiction!

However, many of the characters are based on real people who inspired me is some way or other that I decided to use these people as a base for some of the characters in this work of fiction. However most of their names have been changed, all except Skip Breeze who is very much described as he was at the time we visited Ascension Island in 1994/5.  All the events are also a work of fiction, though some of the places are described from actually visiting them during our 16000-mile voyage. The foul and racist language used by some of the characters would not have been used by any of the real people that the characters are based on. But it has to be stated that South Africa in the apartheid days was home to many people who used this sort of language on a daily basis.

We sold our home and business in 1993 and moved onto the yacht then left the country in April 1994 just before the elections that brought freedom to millions of people of all races. The majority of whites and expats welcomed this, as South Africa was their home no matter who was in control, this includes our three children who have all returned and settled there. We re-visited South Africa in Jan to March in 2011 and found that massive changes had taken place, most that would benefit the poorer majority and a few that enhanced the lives of only the ones in control. Though the changes have been mainly beneficial to the vast majority there are still people on both sides of the fence who are not very happy and this is a worrying development. There is still much to be done before majority rule can claim to have been a real success!
The most amazing aspect of the change was the complete lack of bitterness towards whites and the fact that an entire functioning country changed hands completely without a major war. The leaders of some of the middle-eastern countries now going through the early stages of civil war would do well to look at South Africa. The greatest fear among the people we talked to was that it could become another Zimbabwe if events being played out right now are not controlled by the leaders. South Africa has an amazing future, with assets similar to those of Brazil and ripe for exploitation if only the new politicians get their act together.

There is no suggestion that the living people on which some characters were based carried out any of the actions or spoke any of the words attributed to them in this fictional work.
Copyright exists on all parts of this work.
©-1993 -2005-©.
Al Noteman is the pen name of Alex Notman, the ‘e’ was taken from the family name Noteman in the 17th Century; I have just restored it as my pen name! I started writing this novel while sailing from Cape Town – South Africa during the period 1993 to 1995 then continued writing it while in England and later while in Spain throughout 1996 to 2003 when it was at last completed on New Years Day 2003. Further editing continued after proof printing by UPSO Ltd. right through to Dec. 2005. I expected printing to commence in 2006. Unfortunately, UPSO went into liquidation before the book went into print and this is why it has taken so long to be launched as an e-Book.
I wish to dedicate this work of fiction to my wife Sonia, my two daughters, Simone and Lisa and to my son Dion, who was my first mate on board Jacana during the voyage. The whole family was involved in some way during the 8-years that it took to build our yacht and get it prepared for the voyage of a lifetime. Through these years, what time should have been devoted to the family was instead devoted to boat building and the RCYC Bar then later to writing! Again, the money that should have been lavished on the family was instead spent on yacht fittings and booze at the RCYC Bar. I thank all of them for putting up with me during all the years of skimping on the little luxuries that would have made their lives so much better.
Al Noteman.

A Brief Synopsis of Stolen Time; By Al Noteman.

Samantha McManus and her lover, Pete Ford are contracted to deliver the super-yacht ‘Chameleon’ from Cape Town to Brazil. En-route they are diverted to the diamond coast where a huge heist is in progress. The Peoples Liberation Army of Namibia - (PLAN), are attempting to move a huge cache of uncut diamonds from Namibia’s largest mine at Oranjezainia. The gems are needed to finance the overthrow of the recently elected SWAPO Government of Namibia a plan if successful would lead to further bloodshed in Africa.

Recieving reports of this from their man in Oranjezainia, Directors of the Azainia Mining Company meet in Johannesburg to decide how best to recover their stolen gems but find they are faced with only two choices. The legal choice would be to alert the Namibian authorities and risk being landed with a huge fine, extortionate legal bills and a massive tax bill as well as having to share any remaining profits among shareholders!

Choice two? Though illegal was to keep quiet about the theft and recover the gems in their own way! Lofty Lowland, the tough head of mining, persuades the Chairman that the second option makes more sense and will be more profitable to the Directors, leaving them free to sell the gems quietly thereby avoiding the huge Namibian diamond tax as well as avoiding flooding the market with diamonds. After much boardroom infighting, Lowland gets his way so sets into operation a daring plan. He recruits one, Karl Muller, an ex-mercenary who Lowland tasks with recovering the gems for the company. Muller’s efforts involve armed helicopter assaults, high-speed sea chases and battles. All this takes place in Namibia, Angola and the South Atlantic Ocean. However, it is in the Amazon City of Manaus where Muller encounters the organisation behind one of the most chilling and audacious plots to undermine the third world.

Arriving there, they learn that some of the diamonds will be used to finance a gruesome life extension operation for the terminally ill Chairman of the Azainia Mining Company. Doctor’s Andrade and Narunski, who run the secret Clinica Manaus, have perfected an operation that promises to be the fabled fountain of youth but with terrible strings attached and a price tag that only the super rich can afford.

Pedro Escadore, the Colombian drug lord and owner of Chameleon, finances this clinic to launder the vast profits from his other activities. To further complicate events, word of these life-extending operations reaches SWASP, a little known branch of the CIA. Ben Polinski, its evil director decides to take control of the clinic so that he can use the procedures on third world dictators to further his aims of a New World order. He plans to create a new American Empire, starting with the puppet regimes that SWASP already controls, Polinski figures that with the promise of a longer life for these tame despots, their economies, armies, minerals and labour force, could be exploited for the benefit of the new US Empire. The logic behind his thinking was since the new longer life span offered depends on annual servicing by the medical team at the clinic, there would be no disobedience.

It seems Polinski’s plan is unstoppable. Karl Muller and the crew of Chameleon decide to take a closer look at the Clinica Manaus. What they find is beyond belief, but the involvement of the drug lord, SWASP and the CIA, suggests a connection to the very heart of the US Government. Muller’s small team is no match for such organisations so the British MI6 on neutral Grand Cayman is alerted in the hope that somehow SWASP and its evil director’s ambition can be foiled before an American version of Hitler’s Third Reich is established!
Warning: This story is set at a time before the elections in South Africa that led to independence and equality for all the people in South Africa. Though things had been improving during the apartheid years there were still people who used the language spoken in this story? Therefore the story reflects the language used by real characters. Some of these were not at all politically correct! I do apologise in advance for any offence caused to people from all races that will find this language unacceptable, even in a novel.